Kusama’s KSM price underwent a strong 70% breakout on Feb. 15 as excitement continues to build for the Kusama and Polkadot ecosystems ahead of the upcoming parachain auctions.

Data from Cointelegraph Markets and TradingView shows that KSM rose from $134 to a peak at $236 in the early hours of Feb.16 before profit-selling pulled the price back to $194.

Kusama is an experimental interoperable blockchain platform that is often referred to as a “Polkadot’s wild cousin” due to having a similar codebase. The protocol is built on Substrate, the developer kit/framework for the Polkadot blockchain, and designed to be an interoperable, scalable framework for developers.

Projects that eventually want to launch on Polkadot have the opportunity to launch on Kusama first to test how their protocol will operate in the wild and to access features that are not available yet on Polkadot.

Scrolling through Kusma’s Twitter feed indicates that the latest rally is being driven by hype around the upcoming parachain auctions for both KSM and Polkadot’s DOT. A parachain (parallelizable chain) is a simpler form of blockchain that benefits from the security provided by a “relay chain” rather than its own.

VORTECS™ data from Cointelegraph Markets Pro began to detect a bullish outlook for KSM on Feb.14, prior to the recent price rise. 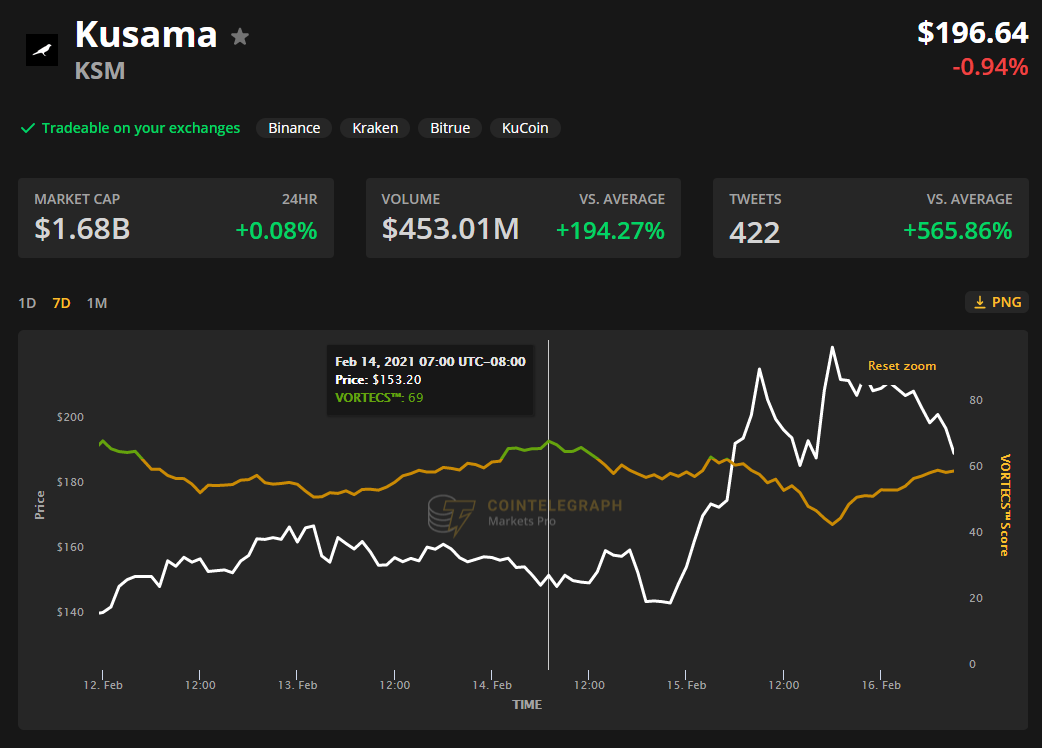 As seen in the chart above, the VORTECS™ score hit a low of 52 on Feb.13, which was followed by a slight decline in the price of KSM. The score then began to increase to a high of 69 on Feb. 14, 24 hours ahead of the price breakout above $200.

Despite the pullback from recent highs, both Twitter and trading volume remain elevated, with the project currently experiencing a 565% increase in Twitter mentions and a 194% increase in average volume.

With the exact date of the parachain auctions still unknown, excitement in the communities is likely to continue to build as quality projects vie for the limited parachain slots and attempt to become central pieces in the Kusama and Polkadot ecosystems.